Relationships are fickle affairs, and so are businesses. Virtually every person and businesses are, at some point, going to screw up, and while various considerations should warrant whether an apology is in order or not, public relations says to say sorry if a mistake is made. However, there are largely two prevailing schools of thought on corporate apologies.

The first one follows the notion of public relations that corporate entities, brands, or pubic figures should apologize for a blunder that is bound to influence brand index or an approval rating.

The other one is not to apologize at all, ever, regardless of the act committed as it depicts a weakness, which would call for more apologies.

In as much as the two ideas make sense depending on the prevailing circumstances, there is one that will always remain the most effective; apologizing sincerely.

Mistakes do not go unnoticed, and in a world ruled by an unregulated platform for spreading news, if a company doesn't strategically handle sensitive issues in time, they may as well close shop and go home.

Back in 2015, Bic South Africa's social-media celebration of International Women's Day went horribly wrong. Bic posted an ad on Facebook showing a woman in a suit smiling with arms folded. The ad read: "Look like a girl, act like a lady, think like a man, work like a boss #HappyWomensDay."

According to a piece written on The Sunday Times, commenters were outraged and a fair share of them expressed their disappointments. One of them commented on the ad: "Look like a girl?' Because the infantilisation of women and the sexualisation of children is exactly the kind of blurred line we need!"

Well, the outrage was expected, although Bic didn't see it so, the message that the ad contained was perceived as being ageist, sexist, misogynistic, and generally moronic. But of course, the ad was pulled down and Bic posted an apology, one that was equally terrible. It read:

​ "We would like to apologise to all our fans who took offense to our recent Women's Day Post. We can assure you that we meant it in the most empowering way possible and in no way derogatory towards women. We took the quote from a 'Women in Business' blog site. The blog site explains the quote and what its intentions were when it was written. BIC believes in celebrating women and the powerful contribution women make to our society."

In a nutshell, the above is no apology. It further infuriated lots of people online and eventually, Bic realized its mistake and replaced the earlier apology with another one:

​Now, the truth of the matter is, the initial apology basically shouted "Hey, it wasn't us! We stole the quote from someone else" which, although it was timely, failed to show sincerity. The second apology is much better because it shows that they owned the mistake, apologized to everyone (which is way better than saying sorry "to those who were offended"), it acknowledges the mistake it made, and says it won't happen again.

Today, it seems that there is always a company or a brand hitting the news for saying something it shouldn't have said and while some do a better job of apologizing, others simply try several times before getting it right. So, the question is, how should a brand sincerely make an apology?

The answer is simple. Be timely and make it heartfelt. Issue a genuine apology immediately after making the mistake. In your apology:

You should also never complicate your apology with fancy words or industry jargon. Use a language that your audience understands. While at it, also make sure that you control the narrative, don't appear weak or defensive while explaining why you did what you did.

The image below shows a sample of a good apology. It was a statement released by Airbnb following reports of racial profiling and discrimination on their site. The apology acknowledges the mistake, shows remorse and offers a resolution. 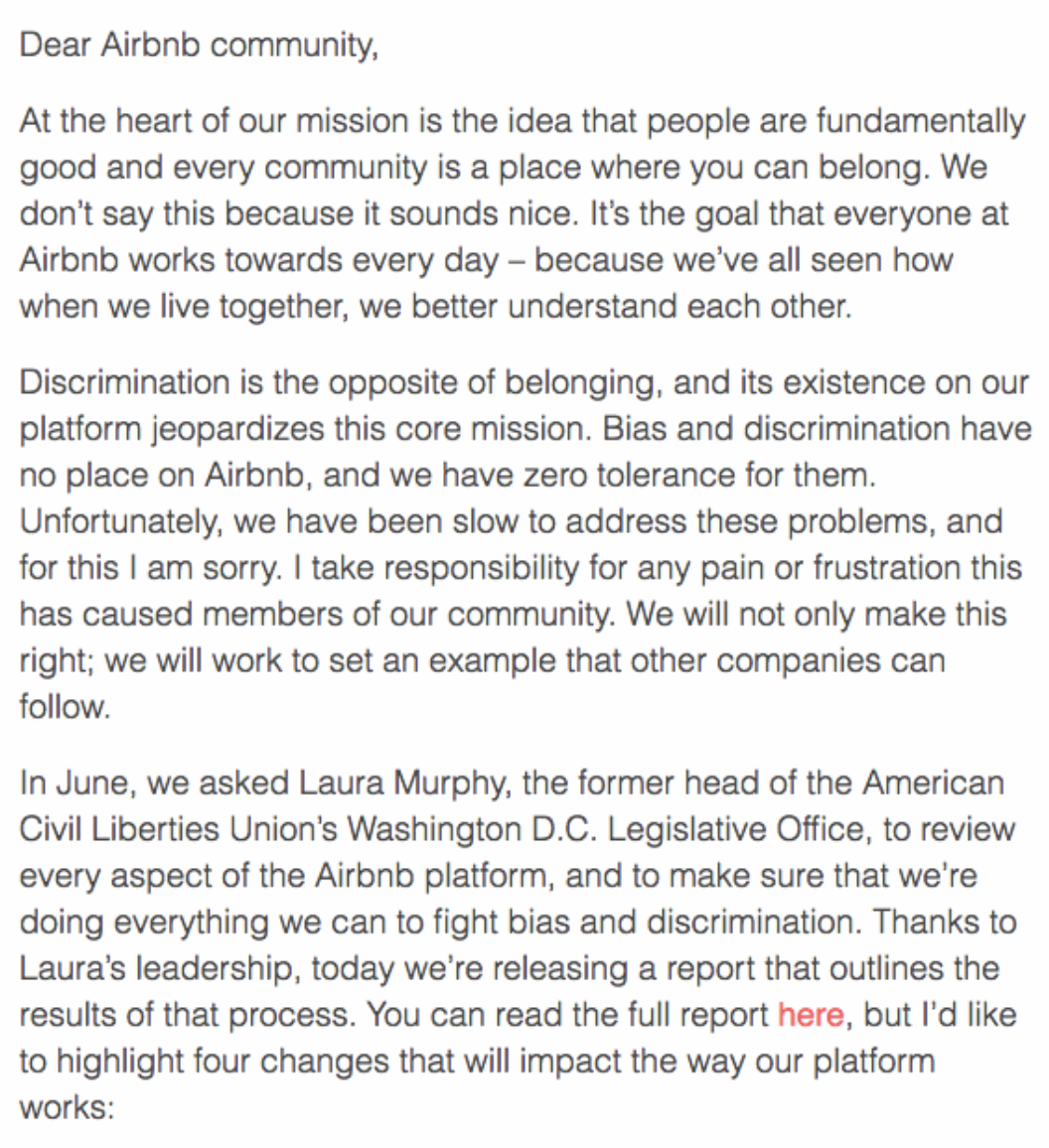 ​Airbnb then sought the help of a legal professional who reviewed their website and highlighted critical issues to prevent any further discrimination.

​ Ultimately, mistakes will continue happening and at the end of the day, while lots of concerted efforts are put in place to control the situation, it holds that an honest and immediate apology can turn things around swiftly. But always remember, while saying sorry, own the mistake and fix the problem.